“In the 1920s Bror Hjorth painted more than forty oil paintings, whilst only eleven during the entire 1930s. A contributing factor to this was probably the general opinion amongst the members of the ‘Färg och Form’ [Colour and Form] group that Bror Hjorth was a sculptor and should only show sculptures in their gallery. But, in 1941, after having employed the fifteen-year-old model Margit, he took up painting again and soon began to sell his paintings through the ‘Svensk-Franska Konstgalleriet’ and ‘Trädgårdhs Konstgalleri’ in Gothenburg.”

“In 1943 Bror Hjorth had a solo show at the Svensk-Franska Konstgalleriet and Nils Palmgren’s review in the Aftonbladet newspaper bore the title ‘Bror Hjorth – the opposition is surrendering – breakthrough’. He had perhaps already in 1935 had his critical breakthrough but now achieved public recognition on a wider front. In the article, the reviewer remarks how ‘the artist has now let go of the naïvely painterly element and has instead consistently aimed for stable compositions, logical constructions, a harmonic rhythm and a complete plasticity’ in his paintings. […] Facing the beautiful teenage girl Margit, his model between 1941 and 1945, he was able to break free from the inhibitions he had suffered as a painter during the entire 1930s. He found her to be ‘as beautiful as a flower and only concerned with being’ and she inspired him to create masterpieces in this new visual language. ‘With Margit as a model Hjorth becomes a true realist, that is how completely satisfied his eye is with what it sees’, thus writes Birger Baeckström in the newspaper Göteborgs Handels och Sjöfarts-Tidning on the occasion of the 1943 exhibition. Otto G. Carlsund observed, in his magazine ‘Konstvärlden’ how ‘with her Hjorth has made a real discovery, like da Vinci with his Gioconda, Rembrandt with his Saskia and Renoir with his rosy-cheeked female cook […] it is evidently with her in front of his eyes that Hjorth refines his form’. During the remainder of the 1940s, he executed a number of paintings of young girls in colourful interiors or in verdant garden settings.” 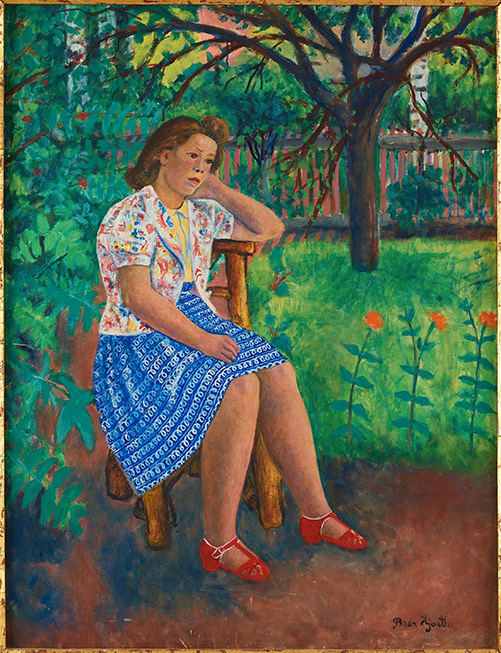 The lot in the catalogue belongs to this group of model studies and portraits with which Hjorth came to wider recognition during the 1940s. In these paintings, the artist’s earlier painting style, characterised by expressionism and primitivism, is replaced by a more naturalistic representation of the objects. The modelling in these paintings becomes, at this time, softer, the colours cooler, and the style soberer, almost classical. It is perhaps within reach to speak of classicism when observing these paintings. One can frequently discern almost sculptural qualities in the depiction of the portrayed girls. The compositionally delicate, well-judged and balanced paintings are often strikingly characterised by a decorative overall impact where individual details have become accentuated by the artist so as to attain maximum effect.

The lot in the catalogue is a fine example of what is being described above and a brilliant illustration of Bror Hjorth’s great talent as a portraitist and painter of models. The painting depicts Margit seated in a classic three-quarter profile against the lush background of the artist’s garden. Organic forms and contrasting colours are added with the addition of branches, bushes and colourful flowers. However, the absolute colouristic highlight of the composition is the model’s red shoes and boldly patterned skirt. In his 1943 review, published in ‘Konstrevy’, Artur Lundkvist calls Margit with her “red shoes and blue patterned skirt” a “leitmotif for the background’s sumptuous display of colour”.

The decorative overall effect is further accomplished with the frame, carved by the artist himself. Bror Hjorth’s frames deserve to be recognised as artworks on their own. Küllike Montgomery has written specifically about the frames: “Because Bror Hjorth carved the frames for almost all of his paintings, he added a sculptural element to the painting. The frames became individualised, they were not to be too evenly carved or with a too deep gold shine. The leaf gold should be sparingly applied and the frame is often carved out of knotty wood.”

Finally it should be mentioned that the present composition could be considered a companion piece to Margit i trädgården (oil on canvas, 117 x 90 cm, 1941) from the same year, which is included in the collections of Moderna Museet in Stockholm.

To be sold at Modern Art + Design