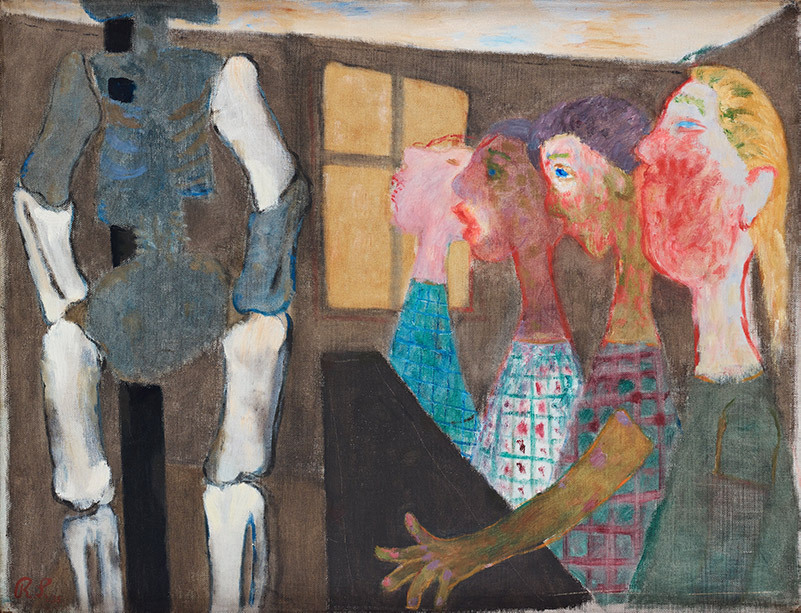 Ragnar Sandberg strives to make the unexpected possible in his painting: to bring about a disorder of the senses. Paint is his medium – by painting darkness, in light shades, he turns prevailing conventions of colour upside down.

It wasn’t obvious that Sandberg would become an artist. He had gone on to study at secondary school and had also been at sea for a short time. Already as a young boy, he had had a great interest in literature and philosophy, perhaps even dreaming of becoming a writer. Sandberg arrived at Valand School of Art at the beginning of the 1920s and studied there for a few years, but failed to make any particular impression. It was, however, noted at a student exhibition in 1925 that Sandberg was the only one who “dared to paint with light and in colour”. According to Tor Bjurström, who taught at the school, Sandberg was a very talented draughtsman but Bjurström “didn’t envision Ragnar Sandberg as a future painter”. After his art studies, Sandberg spent time reading and studying literature and philosophy at home. In the summer of 1929, he ran into his classmate Ivan Ivarson by chance. Ivarson was renting a house on Stenungsön for a few months in the summer and Sandberg couldn’t help but be affected by his friend’s creative zest. He was inspired and impressed by all that Ivarson had learnt and how much he had developed during his extensive travels abroad and from staying with a Swedish artist couple, the Kylbergs. Iverson's absolute notion that colour could express something unique became the spur that Sandberg needed to take up painting again.

At the start of the 1930s Sandberg, therefore, moved to Gothenburg to try and make a career as an artist. This was during the Great Depression, but despite this, he managed to settle in and with fresh eyes began to depict his surroundings in both images and text. The city’s sounds, lights and vehicles became a source of inspiration for him, but the city’s animals also caught his attention. Little by little, however, he began introducing people into his imagery – mostly as passing peripheral figures in the hustle and bustle of the street – it was only in the artist’s later production that they became the central motif. Other sources of inspiration were found in continental painting. He was able to access some of these works in the collections of the Gothenburg Museum of Art, and he was also a frequent visitor to the library of the city’s Röhsska Museum, which had an extensive selection of art journals, newly written pamphlets and contemporary art writing – all allowing him to keep himself up to date despite his geographical remoteness. He was particularly drawn to the painting of French artists Pierre Bonnard and Fernand Léger and was a great admirer of the Spaniards Francesco Borès and Joan Miró.

After a trip to France at the end of the 1930s Sandberg returned to Gothenburg filled with admiration for Bonnard’s poetic painting and sensual colours. Sandberg began depicting the city and its inhabitants. He used his imagination and portrayed the bustling life in a poetic light, just as he had learnt from Bonnard. The high-spirited treatment of colour was now subdued, using earthy tones and sooty shadows; the paint diluted like watercolour as he drew on the glazed canvas with an almost dry brush.

The present lot in the auction, Biologilektionen, executed in 1938, is typical of his work from this period with its muted colours, but also in its humoristic and playful imagery of the students closely gathering around their fascinating object of study; a skeleton.

To be sold at Modern Art + Design